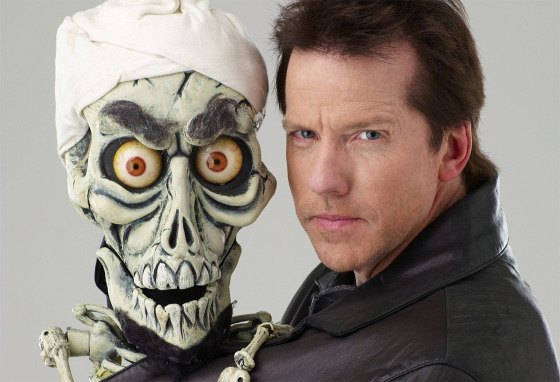 Ventriloquist Jeff Dunham with his character Achmed the Dead Terrorist.

Achmed the Dead Terrorist is huge on YouTube. Seriously.

Occasionally (maybe once every few months) out of curiosity I do a quick search on YouTube to see what the most popular puppet video is. I checked yesterday and was surprised to discover that it’s a clip of Achmed the Dead Terrorist. Achmed is a bearded skeleton with a turban that seems to be have become of one of veteran Ventriloquist Jeff Dunham’s most popular characters. In the last year or so the crazy little guy has racked up well over 50 million views on YouTube.

I first saw clips of Jeff performing Achmed late last year and to be perfectly honest I didn’t post them here because while I admit I laughed really hard at some of it, I thought it was an act that skirts line the line between humour and racism (and occasionally crosses it). While I might found some of the act a little distasteful, Lindsay Campbell seems really offended by it, calling it “a fear mongering depiction of Muslim culture,” and has been devoting time to the issue on the popular video podcast MOBlogic:

Audiences like to be able to laugh at something that scares them and terrorism – to borrow a phrase from Achmed – still scares the crap out of most Americans right now. At the risk of over-analysing, I think that by embodying terrorism in the form of a funny little wisecracking skeleton Jeff gives his audience permission to laugh at their fears and make light of very serious subjects like Muslim extremism and the war in Iraq. It also helps that Jeff Dunham is one of (if not the) most talented Ventriloquists in the world today and the act is, you know, pretty funny.

The mistake that I think Jeff makes with Achmed – or at least what I think leaves him vulnerable to criticism of being racist – is that some of the humour is about (and reinforces) racial stereotypes instead of Achmed’s character. He’s a funny puppet with some great catch phrases (“Silence! I kill you!”, “Holy crap!”, “You racist bastard!”, etc.) and the war of terror is a prime target for satire, so there’s no need to resort to Arabic/flem jokes to get over with a crowd. Those are cheap laughs and Jeff’s way too talented to need to rely on them, especially when he has a great a character like Achmed with so much potential.

What do you think? Is Achmed really racist, really funny or a little bit of both?