Maybe I’m more inclined to notice than the average NFL fan (confession: I’m not really much of a NFL fan), but there seem to be more puppets than usual hanging around the big game this year.

First up is the video embedded above, which Showtime Sports commissioned Glove and Boots to do and aired on Inside the NFL last week. Of course it’s funny – as we’ve come to expect from Glove and Boots – but more importantly, it teaches you a number of things about the Superbowl…most notably, that the Showtime channel actually covers sports.

I did not know that. 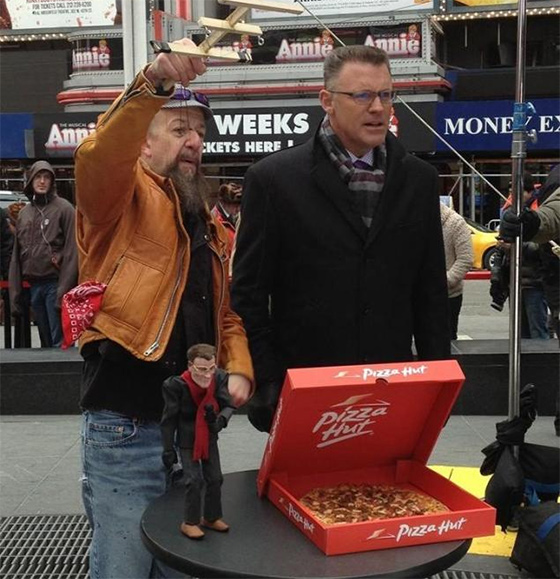 Puppeteer Ricky Syers with his puppet of broadcaster Howie Long next to the flesh-and-blood version in New York’s Times Square (photo via Facebook).

Fox Sports obviously wanted to get in on the puppet action this weekend, so they commissioned New York street puppeteer Ricky Syers to create a marionette in the likeness of former NFL star and current Fox Sports analyst Howie Long for a Pizza Hut promotion.

(I haven’t been able to find any video of this, but if you’ve seen it please share it in the comments below).

Finally, Toyota clearly understands that if you’re going to hawk your cars during America’s biggest game you should just go out and hire America’s most famous puppets. The result is this actually-pretty-funny commercial starring the Muppets and another former NFL star, Terry Crews.

In addition to the main commercial, Toyota has also produced a series of viral videos to accompany it online, including this extended version of the commercial’s Electric Mayhem song:

All of the Toyota Muppet videos can be found in Toyota’s YouTube channel.

So if you’re a football fan, enjoy the big game tomorrow, and even if you’re not, well, take heart that there really does seem to be something in the hoopla surrounding it for everyone.