This week visitors to the Sundance Film Festival got their first look at Kaiju Fury!, a new 3D cinematic virtual reality film.

The film blends traditional Tokusatsu filmmaking techniques and immersive virtual reality technology to put the viewer at “Ground Zero” of a Godzilla-style monster battle. It was shot with a special 360 degree camera using monster suits and a miniature city that was built by staff and students at the Stan Winston School of Character Arts in California.

In order to fully appreciate and experience Kaiju Fury you really need a virtual reality viewer, but this video gives you a bit of an idea of what it’s like:

The project is a collaboration between The Stan Winston School, virtual reality developer Jaunt and production company New Deal Studios. It was directed by Ian Hunter, an award-winning VFX Supervisor who has worked on several of Christopher Nolan’s films, including The Dark Knight and Interstellar.

“As a director, 360º VR gives you the chance to stretch as an artist and create a fully realized world. Instead of crafting a narrative by looking in, you have to forge the experience by seeing out. It’s a very exciting journey: mixing spectacle and story while trailblazing a new medium.” 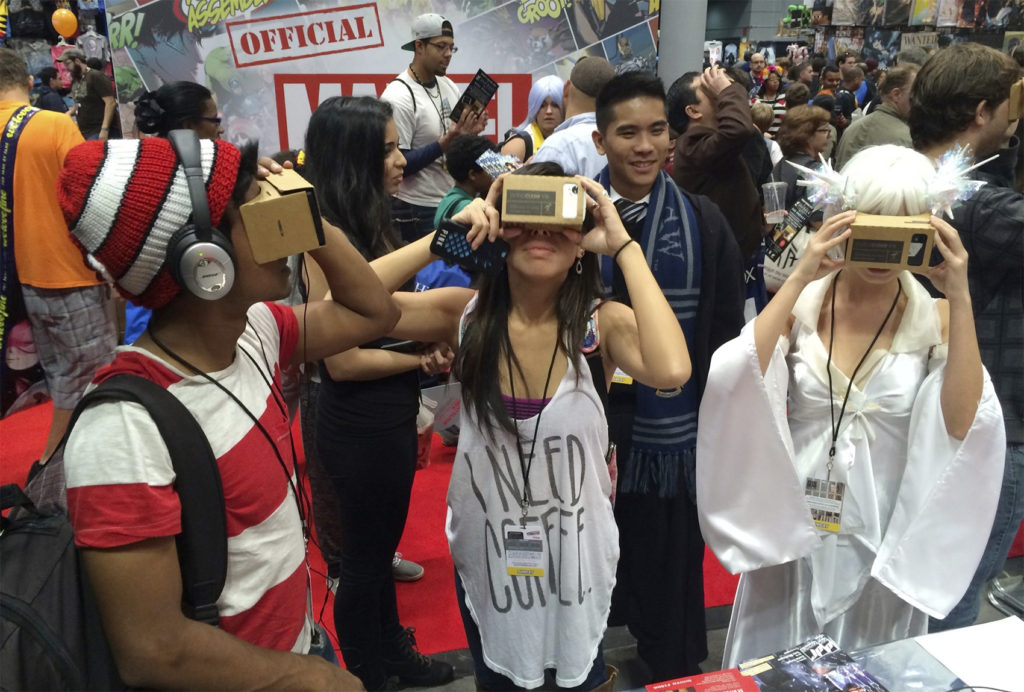 Kaiju Fury is designed to be watched using Google Cardboard, a low-cost virtual reality viewer made from cardboard that when mounted on a smartphone and held against your face provides a virtual reality experience (sort of an inexpensive, DIY version of the Oculus Rift headset).

A three minute preview of Kaiju Fury debuted at the Sundance Film Festival, where it seems to have generated a lot of interest, although reactions were a bit mixed. Several reviews described it as “action packed, but underwhelming”, which I suspect has more to do with the challenges of making something with virtually no precedent than the talents of anyone involved. I suspect it’s going to take artists at least a few years to figure out how to properly engage audiences and tell stories with virtual realty.

The tech industry is very bullish on the potential of virtual reality right now and investors are pouring a lot of money in to companies developing VR hardware and software. While I don’t doubt there will be lots of useful applications for technology like this, I’m still a little skeptical of the notion that “cinematic VR” will replace traditional filmmaking. We’ve been promised revolutions in filmmaking before and they didn’t amount to much.

I don’t know if we’re really witnessing the dawn of a completely new way of telling stories yet, but with experiments like Kaiju Fury being developed it will certainly be interesting to see what happens in the next few years!

You can download Kaiju Fury in the Google app store. You’ll need a compatible smartphone with a five to six inch screen and Google Cardboard, which you can buy premade or make using plans available from Google.