Haven’t we seen this girl before?

This is a new ad for Mayflower, a moving and storage company in the United States. While I do really like this ad conceptually, it might seem very familiar to you…and that’s because, well, it is. Much like yesterday’s post about Fighting Gravity, this is another case of a well-known puppetry concept being co-opted and passed off as an original idea. In this case, it’s suspiciously similar to the famous giant girl from The Sultan’s Elephant by Royal DeLuxe.

Here’s a side-by-side comparison of Royal DeLuxe’s original giant girl marionette (right) and the one in the Mayflower ad (left): 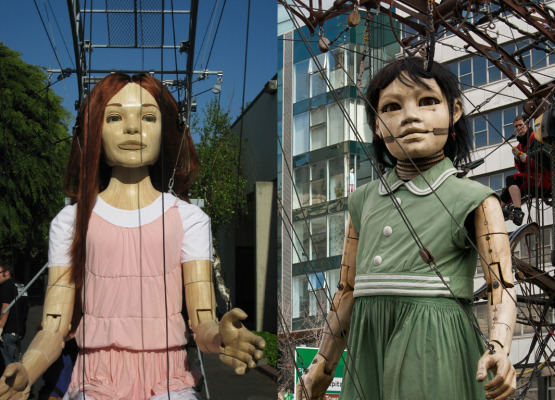 Are these two giant puppets a little too similar? Where does inspiration stop and copying begin? (photo sources: The Character Shop | SW77)

The giant marionette in the Mayflower ad was built by The Character Shop, a talented FX shop in L.A. (they’re somewhat infamous in animatronic circles for appropriating and trademarking the term “waldo” despite having not originated it). The Character Shop has a couple of really in-depth web pages that explain their building process here and here.

To be fair, Royal DeLuxe didn’t completely invent the idea of a giant marionette, they just (arguably) do it bigger and better than anyone else. Giant puppets have been around forever and Royal DeLuxe’s original concept of a giant doll/marionette like this has been “borrowed” before, although in that case the ad agency involved at least acknowledged where the idea came from (sort of).

It’s difficult to fathom that the Mayfair ad was done without referencing Royal DeLuxe’s work, but at the same time the simple fact is that unless Royal DeLuxe had the foresight to patent their design, everyone involved in the Mayfair commercial is probably in the clear legally (this is also a very good example why if you design something new and want to protect it, you need to patent it). I think that the more important question here is ethical.

When are you taking inspiration from something and when are you simply ripping it off? How do you distinguish the line between the two? I’m not really sure myself, but in this case the girl in the Mayfair ad certainly does feel like a bit of a rip-off to me. If I was Royal DeLuxe, this would certainly leave a bad taste in my mouth.

What do you think?

Special thanks to Bruce for spotting the Mayflower ad!