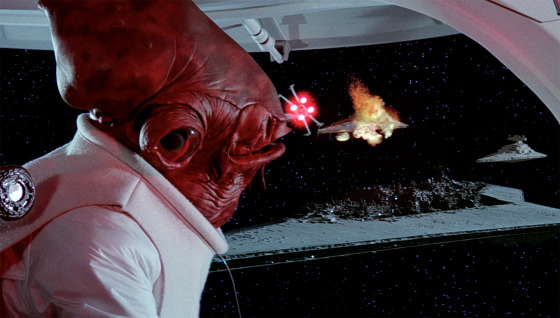 Admiral Ackbar in Return of the Jedi (photo © Lucasfilm)

Like a lot of kids my age, I was obsessed with Star Wars when I was growing up. I especially loved learning about how all of the monsters and special effects were created by Industrial Light and Magic. The photo below (taken from the documentaryClassic Creatures: Return of the Jedi) provides a glimpse of how one of the original trilogy’s famous aliens, Admiral Ackbar, was brought to life. 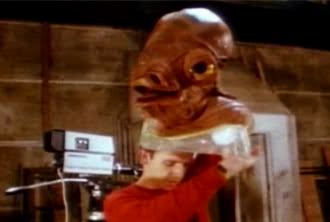 Ackbar has developed a huge cult following over the years, largely due to the fact that he has one of the most parodied lines in the original trilogy (“It’s a trap!”).

In the original trilogy he was performed by puppeteer Tim Rose (pictured at the right), who also performed the puppet of singer Sy Snootles (which was eventually replaced in the “special edition” with a computer animated character) and Jabba The Hutt’s annoying sidekick Salacious Crumb.

Tim discusses his work on Return of the Jedi in this great interview:

The Mon Camamari (the fictional alien race Ackbar belongs to) also appeared in the Star Wars prequels. They were realized using very impressive radio controlled animatronic masks, as seen in the video above.

4/2/14 Update: The “Classic Creatures” documentary has been taken down on YouTube.

21/4/14 Update: Added this great shot (above) of Ackbar being built from the Star Wars Instagram feed.