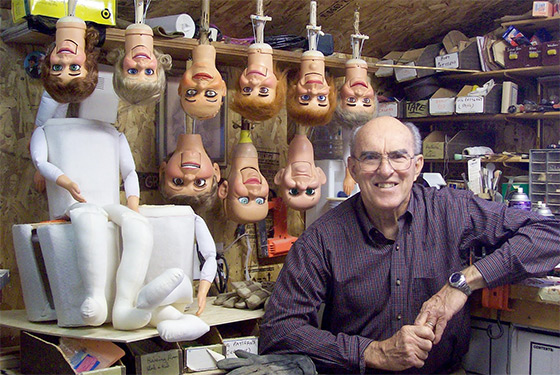 Sadly, I just learned that Clinton Detweiler – who was an important pioneer in the American Ventriloquist community – passed away yesterday following a heart attack. Clinton’s daughter Joy posted this earlier today on his blog:

It is with heavy hearts we inform you that Clinton Detweiler passed away suddenly and unexpectedly on January 22, 2013.

His love for ventriloquism and the many ways it allowed him to not just create objects but to connect with people was evident in all that he did.

Thank-you for being a part of his life…he enjoyed posting on the blog and trying to help those that had questions. We are so sad that this blog will no longer continue.

Clinton began his career as an educator in the late 1950s developed the then-unconventional idea of using ventriloquism in the classroom to help teach his students. This helped inspire him to found Maher Studios, which eventually became the leading ventriloquism supply house in North America, selling how-to videos, books, puppets and just about everything else that an aspiring Ventriloquist could ever need. He also created the Maher Home Course of Ventriloquism, a correspondence course that taught thousands of people around the world how to perform Ventriloquism. He was also a past President of the North American Association of Ventriloquists.

Mather Studios was wound down in 2006, but Clinton remained active, designing and building puppets and pursuing other endeavours right up until his death; his last blog post from late last week mentions purchasing a circle cutter from Wal-mart for his latest project.

Clinton and I never met in person, but we had corresponded online several times over the years. Much earlier in my career he helped me gain a better understanding of basic mechanical motion and the inner workings of traditional Ventriloquist Figures. His wisdom and knowledge was especially helpful when I launched the now-defunct PuppetBuilding.com web site back in 2006. I always wanted to own one of his famous Talking Baseball Bats and I’m very sorry that I never got around to asking him to build one for me. He was a friendly, generous and incredibly helpful man. A true class act.

My deepest condolences to Adelia Detweiler and Clinton’s entire family. He was loved and respected by so many, and very deservedly so.

25/1/2013 Update: The Detweiler family has announced that a memorial for Clinton will be held next Wednesday, January 30 at 3:00 p.m. at the Bethany Evangelical Free Church in Centennial, Colorado. Cards and Flowers may be sent to the family via:

In lieu of flowers, donations may be made to the Missions Fund at  Bethany Evangelical Free Church (thanks to the Vent Haven ConVENTion for providing this information).