Like much of North America, Toronto has been having a very snowy and extremely cold winter. The temperature has been hovering close to or below -15ºC (about 5ºF!) on most days since Christmas. With no shoots for PuppetVision: The Movie planned until mid-March, this hasn’t left me terribly motivated to do much except hibernate indoors and try to catch up on a lot of the research that I still need to do for the film.

I have braved the cold to make a few trips to the local library (there are few things we love here in Toronto more than our libraries). On my latest visit I was greeted with a surprise, a book I had been waiting months to read was finally sitting on the pick-up shelf,  Grant Hayter-Menzies’ new book Shadow Woman: The Extraordinary Career of Pauline Benton 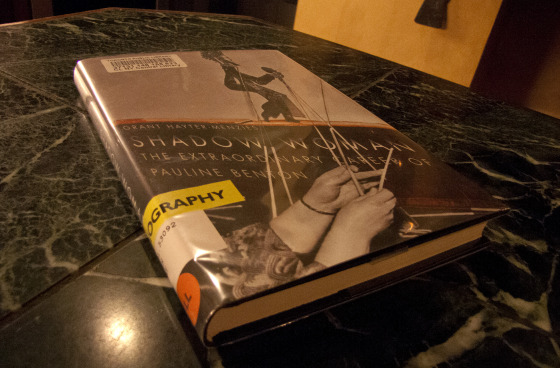 Shadow Woman: The Extraordinary Career of Pauline Benton is a new book by Grant Hayter-Menzies about the pioneering American puppeteer who brought Chinese shadow puppetry to North America.

Now, you can be forgiven for not immediately knowing who Pauline Benton was. While she is not exactly a household name, she was one of the most influential American puppeteers of the 20th century. If you live in North America and have ever used or enjoyed watching Chinese-style shadow theatre, chances are it’s either directly or indirectly because of Pauline Benton and the work of her company, the Red Gate Shadow Theater.

Born in Kansas in 1898, Pauline became enchanted with traditional Chinese shadow puppetry (piyingxi) while living in Beijing during the 1920s. Although shadow theatre was was much more prominent in China then than it is today, even a century ago there were signs that it was in decline. Realizing this, Pauline took it upon herself to help preserve the Chinese shadow tradition by introducing it to American audiences. 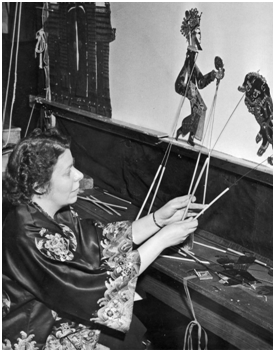 After training in China with traditional shadow puppet masters – no easy feat since women were generally unwelcome in the Chinese shadow theatre – Pauline returned to the United States and formed a touring company, Red Gate Shadow Theater. Although we’re used to seeing Chinese shadow puppetry today, it was an exotic novelty unknown to most Westerners in the years prior to World War II. Red Gate quickly gained popular and critical success touring the country and even performed for U.S. President Franklin Roosevelt at the White House during the Great Depression.

Pauline spent most of her adult life devoted to Chinese shadow puppetry. She wrote one of the first serious texts about it, The Red Gate Players Introduce The Actors and Plays of the Chinese Shadow Theatre in 1940 and authored several other articles in popular magazines like The Christian Science Monitor throughout her career.

Even though Pauline is no longer with us, her legacy is. The remarkable collection of Chinese shadow puppets that she amassed during her lifetime is now held by New York’s Chinese Theatre Works, who continue to exhibit and perform them. She continues to be an inspiration to many artists, among them Annie Rollins who has a great blog and fantastic web site devoted to Chinese shadow puppetry.

If you live in the Northeastern U.S. and would like to learn more about Pauline Benton and her work, Grant Hayter-Menzies will be discussing his book as part of the Spring Puppetry Forum at The University of Connecticut on March 12th (the event is free to attend).

Shadow Woman: The Extraordinary Career of Pauline Benton is available to order online through Amazon