I saw some sad news pop up on Facebook while working on some hand puppets in the studio today…American puppeteer Lewis Mahlmann has passed away. Although Lewis’ name might not be well-known internationally, he was a puppetry legend in California thanks to his decades of work at one of America’s first themed amusement parks, Children’s Fairyland in Oakland.

Lewis was born in Chicago in 1927. He began his puppetry career performing in public venues like department stores and out of his own home as The Lilliputian Players as a young man while simultaneously maintaining a successful real-estate career. Well known in California’s small, but burgeoning puppetry community in the 1950s, he became a puppetry consultant at Children’s Fairyland when it first opened in 1956 and eventually quit real estate to become its full-time Artistic Director a decade later. 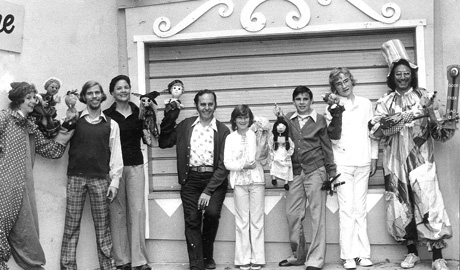 Lewis Mahlmann with The Vagabond Puppets at Children’s Fairyland in 1974 (Lewis is fourth from the left). Photo via the San Francisco Bay Area Puppeteers Guild.

The Open Storybook Puppet Theater at Children’s Fairyland, is the oldest continuously operating puppet theatre in the United States. For decades under Lewis’ direction it was a training ground for some of the America’s finest puppeteers. During his many years there Lewis mentored dozens of young, aspiring puppeteers, not the least of whom were Frank Oz and Jerry Juhl.

Although Lewis formally retired from Children’s Fairyland in 2006, he returned a few later to help create The Magic Blossom, a play based on Shakespeare’s A Midsummer Night’s Dream that was staged at Fairyland last year and hailed as his “final” show.

In addition to his work at Children’s Fairyland, Lewis taught puppetry at San Francisco State University and co-wrote a number of puppetry books. A charter member of The San Francisco Bay Area Puppeteers Guild, he also served as President of the Puppeteers of America. His work and career were recognized earlier this year with a Lifetime Achievement Partners in Preservation award from the Oakland Heritage Alliance.

I mentioned at the beginning of this post that I learned of Lewis’ passing while we were working on some hand puppets that will be used in PuppetVision: The Movie. We’ve been working from an old, fantastic puppet pattern I discovered in a library while doing some research. In an odd coincidence, guess who just who happened to have drafted it?

None other than one Lewis Mahlmann.

Rest in peace Lewis…and thank you for the help.