The Norwich Puppet Theatre is celebrating its 35th anniversary!

Founded in 1979 by Ray and Joan DaSilva, The Norwich Puppet Theatre is a permanent puppet theatre housed in a 600 year old medieval church in Norwich, England. As part of their anniversary celebrations, they’ve put together an outstanding line-up of artists to create a new production of Beauty and the Beast, specifically tailored to the theatre’s unique nature. 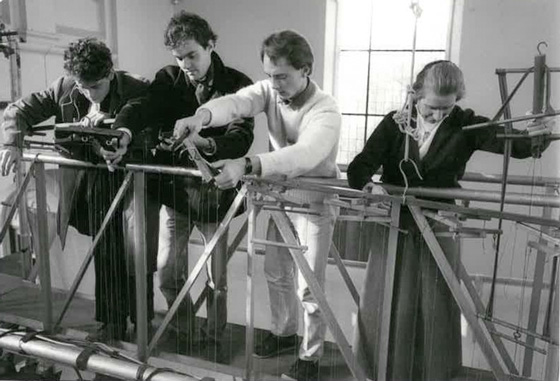 An undated photo of Norwich Puppet Theatre’s marionette bridge in use during one of its early productions.

A key element of the production is the theatre’s marionette bridge, one of only three that exist in Britain (the others are located at the Little Angel Theatre in London and the Harlequin Puppet Theatre in Wales). Although the bridge was utilize in many of the theatre’s early shows, it fell in to disuse two decades ago due to the cost associated with producing shows using long string puppets.

Norwich Puppet Theatre hopes to put the marionette bridge back in to regular service. A large portion of the funds from their Kickstarter campaign will be used to refurbish it, as well as to build new marionettes to take advantage of it.

While unfortunately I haven’t had the opportunity to visit Norwich Puppet Theatre myself, I’ve been told wonderful things about it for many years. The theatre is an important centre and advocate for puppetry in the United Kingdom and deserves as much support as possible.

As of this writing, they have raised approximately £1,220 of their £2,000 goal, but have less than two weeks left in their campaign. Please consider supporting Norwich Puppet Theatre on Kickstarter and help propel them in to another 35 years of outstanding puppetry in the East of England!