Why the TV Apocalypse is a very good thing 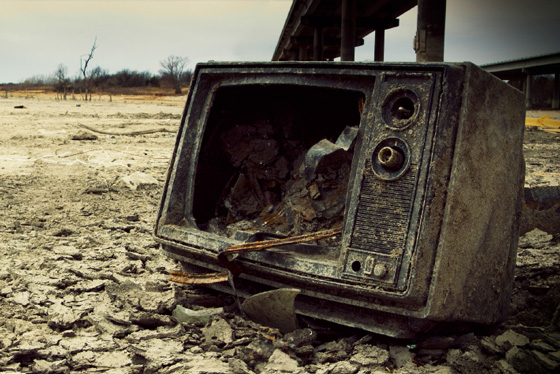 The television industry is ill and the prognosis is not good.

I originally intended to write about this last month, when The New York Times reported that profits of the major American networks were in sharp decline. The situation has been much the same here in Canada, with CBC making steep cuts because of a funding shortfall, CTV on track to loose $100 million this year and the Global TV network teetering on the verge of bankruptcy (and those were just the headlines last month).

But you know what? I think all this is ultimately a very good thing.

Don’t get me wrong, if you make your living in television what’s going on right now is downright scary. No one wants to see companies losing millions, freezing wages and axing jobs, but that is what is going to happen. Because it needs to. The television industry has always been a big, fat, inefficient businesses. Andrew Baron (the creator of Rocketboom) did a really good blog post a little while ago about this, explaining his belief that the TV studios will die. And die they should, if that’s the price of having a new generation of talented, creative and dynamic people engaged in open, accessible media.

What does all this mean for puppeteers and puppetry? Well, if you’re entrepreneurial, creative and want to produce your own low-cost shows online there’s probably never been a better time for you than this. On the other hand, relatively high-paying unionized film and television puppetry gigs (which were already in decline) are going to be a thing of the past. The puppeteers/companies that are going to thrive are the ones that seize the moment instead of bemoaning that things aren’t the way they used to be.

Walt Disney once said that if it wasn’t for the Great Depression he never would have been able to build his studio; the combination of harsh economic conditions and Disney’s ability to offer a relatively steady pay cheque meant that he could have his pick of the best artists in America. It seems we’re entering a similar period in history now and that “creative destruction” is the order of the day. Sure there is a lot of bad news in the air, but as Disney himself put it, sometimes “a kick in the teeth may be the best thing in the world for you.”