Hit enter to search or ESC to close
NewsPuppeteers 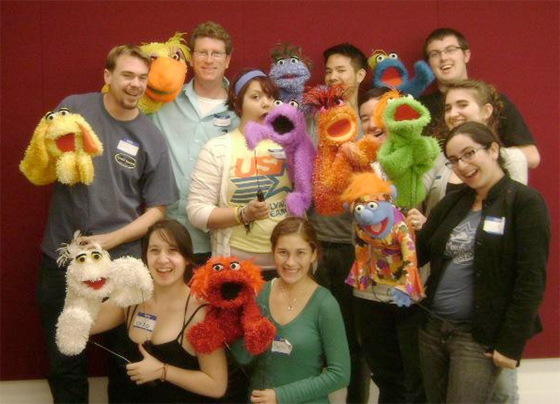 Michael Earl (top row, second from left) poses with some of his students from his Puppet School workshops.

Michael is a 30-year veteran of film and television puppetry. He began his career as an apprentice at the famous Children’s Fairyland Puppet Theater in Oakland, California (a fertile breeding ground for puppeteers in the `60s and `70s, most notably original Muppeteers Jerry Juhl and Frank Oz among many others). He began working with the Muppets in the late `70s and early `80s on projects like The Muppet Movie, The Muppets Take Manhattan and Sesame Street, where he played the role of of Mr. Snuffleupagus. Michael has been primarily focused on teaching puppetry over the past several years through his company Puppet School, having previously mentored many successful film and television puppeteers, including  Kevin Carlson, James Murray, Drew Massey and Sean and Patrick Johnson of Swazzle.

Unfortunately, Michael’s condition has left him in considerable pain and his treatment will likely require a combination of surgery, chemotherapy and radiation. This means that Michael – who does not have any medical insurance – will be unable to work for at least several months and is being saddled with very large medical bills. The puppetry community has rallied to support him since news about his condition was disclosed and to date The Michael Earl Cancer Fund has raised over $16,000 US towards an eventual goal of $100,000.

For those of you in California, Swazzle is hosting a fundraiser and sale at their studio in Glendale, California on Saturday. They will be selling puppet building materials like fake fur, fabric, feathers and fleece, puppet costumes and props, and audio equipment such as speakers, microphones and amps. There will also be a silent auction for a handcrafted Swazzle puppet and other great prizes like the chance to win a phone call from Walter from the Muppets! All of the proceeds from the sale will be donated to the Michael Earl Cancer Fund (for more information please visit Swazzle’s Facebook page or read this blog post).

Even if you’re not able to attend Swazzle’s fundraiser, you can still get involved in the campaign to support Michael during this difficult time by making a donation to the Michael Earl Cancer Fund online. Any donation, in any amount, will be very welcome and appreciated.

Michael has also started a new blog at michaelearl.blog.com where he will be updating friends and fans about his treatment as it progresses and you can send him well wishes via the comments.