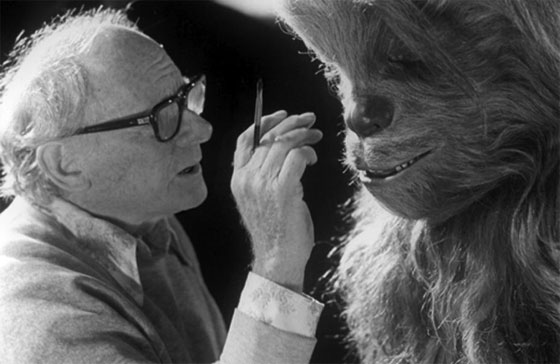 Various reports have come in that British Creature FX legend Stuart Freeborn – a man whose credits included some of the most influential films of the 20th century – passed away in London on Tuesday at the age of 98.

Star Wars makeup artist Stuart Freeborn, who helped create Chewbacca, Yoda, Jabba the Hutt and the otherworldly creatures in the trilogy’s famous barroom scene, has died, Lucasfilm said Wednesday. He was 98. A creature effects artist, Freeborn also worked on other film classics and was responsible for creating the apelike human ancestors in the “Dawn of Man” sequence in 2001: A Space Odyssey.

…”He brought with him not only decades of experience, but boundless creative energy. His artistry and craftsmanship will live on forever in the characters he created. His ‘Star Wars’ creatures may be reinterpreted in new forms by new generations, but at their heart, they continue to be what Stuart created for the original films,” (George) Lucas said in a statement.

It feels like we’ve lost far too many legends who have made important contributions to puppetry in the past year or so, but wow, what a career Stuart Freeborn had. I think that real magic of the special effects he created were that they didn’t appear all that “special” (at least at first glance). He made you believe that seeing a talking ape, a seven foot tall Wookie or a diminutive green Jedi Master living in a swamp was the most completely natural, believable thing in the world …and that is perhaps the greatest compliment that anyone can ever pay an FX artist.

Stuart Freeborn was truly one of the Masters. May he rest in peace.