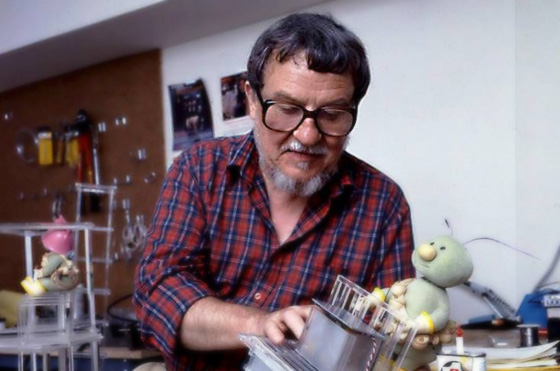 Franz “Faz” Fazakas tinkers with a remote controlled Doozer puppet during production of “Fraggle Rock” in the 1980s.

Reports have been circulating on social media that Franz “Faz” Fazakas – the Academy Award winning puppet builder and mechanical designer responsible for many of The Muppets’ technical innovations – has passed away. He was 95 years old.

Faz’s puppetry career started with Bil Baird’s company in the 1950s, performing marionettes both on and off Broadway (often alongside Jerry Nelson). He began working with Jim Henson and The Muppets as a puppeteer in the early 1970s, but his flair for mechanical design eventually landed him full-time in the Muppet Workshop. There he created a series of technical innovations that increased the Muppets’ range of expression and movement, including eye mechanisms for characters like Big Bird and the sophisticated rod and cable control systems used by tiny puppets like Fraggle Rock’s Doozers.

One of the most famous showcases of Faz’s work are probably the rowboat scenes in Emmet Otter’s Jug-Band Christmas, which represented a major breakthrough in remote control puppetry in 1976:

Faz continued to play a crucial role in the Muppets’ technical development throughout the 1970s and `80s. He was instrumental in developing many of the techniques used to create The Dark Crystal and designed Waldos and marionette rigs that made memorable Muppet moments like the cooking rats in Muppets Take Manhattan, the bike riding scene in The Great Muppet Caper and even made the Teenage Mutant Ninja Turtles possible. His two decades of research and development in puppetry mechanics culminated in a Scientific and Engineering Academy Award for his role in designing the Henson Performance Control System in 1992.

Faz left the Henson Company in the mid 1990s, but his influence on puppet mechanics continued to be felt throughout the puppetry world up to the present day. I’m sure that his legacy will continue to live on for a long time to come.

Rest in peace Faz…and thank you.