Clay and Paper Theatre: Celebrating 20 years of puppetry in the park

Animal Nature is the latest production of Clay and Paper Theatre, a dynamic Canadian company that has been bringing to life original theatre and outlandish spectacles here in Toronto for twenty years.

Clay and Paper and its founder, David Anderson, embrace an activist, socially conscious approach to creating large scale, outdoor puppet theatre. Almost all of their shows are rehearsed, built and performed in the open air of Dufferin Grove Park in Toronto’s west end. The entire community is welcome to participate and admission is always on a pay-what-you-can basis.

As a community-based, socially conscious giant puppet company committed to social justice, Clay and Paper might remind you of Vermont’s Bread and Puppet Theatre. The similarity is not entirely coincidental. Although the company has established a unique style and voice that is very much rooted in the culture of Toronto, David began his career in outdoor theatre in Vancouver with the Breadbaker’s Theatre, which was founded by Canadian Bread and Puppet alumni. 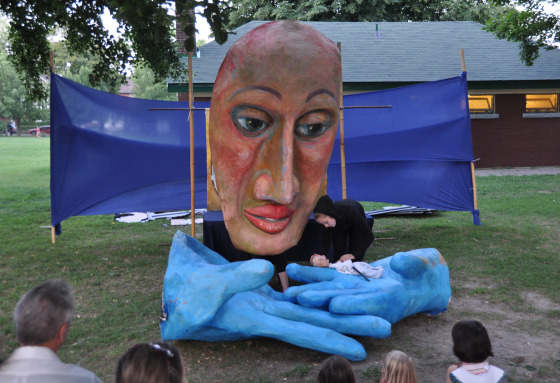 The finale of Clay and Paper Theatre’s A History of Forgetting (2012).

David was searching for a place to store giant puppets in 1994 when he was approached by members of the Dufferin Grove community and asked to establish a workshop in the park’s unused field house. The neighbourhood was looking for away to discourage undesirable activity in the local park and promote a family friendly atmosphere and thought that the presence of a theatre company might help. Clay and Paper Theatre moved in and the new workshop quickly became a fixture of the community, drawing young and old alike to watch as new puppets and shows were being created.

The story of the park – and Clay and Paper’s role in it – was told in the National Film Board of Canada documentary Citizen Z:

Each year Clay and Paper produces an annual summer production as well as a number of seasonal spectacles. Puppets on Ice (sometimes called Puppet So Nice) is a winter skating event. Day of Delight is a one-day multidisciplinary spring festival that celebrates “love, courtship and desire.” Finally, the annual Night of Dread (my personal favourite) draws thousands of people to Dufferin Grove Park in masks and costumes on the Saturday before Halloween to “confront and banish their private and collective fears” .

This year’s summer show, Animal Nature, features a Canadian mélange of giant puppets who are forced to set out on a fateful journey to the edges of the earth. Described as “an epic papier-mâché tale of the search for the way home”, like much of Clay and Paper’s work, it draws inspiration from age old folk traditions while commenting on issues facing modern society.

The show’s beautifully designed animal characters were inspired by Western Canadian Aboriginal mask and sculpture traditions, in particular the work of Bill Reid. Their large heads were made using a unique latticework papier-mâché technique that David has developed over the past several years (Clay and Paper has a gallery of photos documenting the building process on Facebook) and have been beautifully painted by Russian-Canadian puppetry artist Liudmila Lipovskaya. 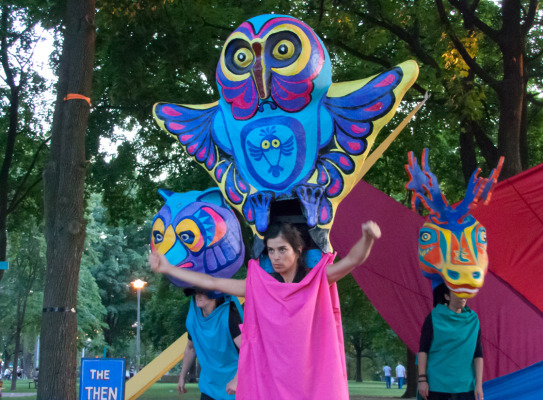 Reflecting Animal Nature’s theme of people from different places being pushed and forced to work together, the diverse cast and crew includes artists from variety of places, ranging from Argentina to Iran, the former Soviet Union and Canada’s First Nations. David calls them one of the best groups he’s ever worked with and I believe him. Animal Nature is the best Clay and Paper show I’ve seen and you just have to come out and spend a little bit of time with them in the park to appreciate how special and wonderful the team behind Animal Nature is.