A very happy birthday to Bernice Silver, who turned 101 yesterday!

If you don’t know Bernice, you really should. She’s one of the oldest and most universally beloved puppeteers in America and among the world’s oldest active performers. She’s also one of my favourite people in the entire world.

Known as the “Queen of Potpourri”,  she’s a legend in the American puppetry community for her devastatingly hilarious Potpourri performances that usually feature a combination of poems, songs, costumes and puppets (“Potpourri” is a puppet slam-esque cabaret that’s featured at most American puppetry festivals).

A staple of Bernice’s act is to try to convince the audience that she’s senile. She’ll pretend to have to read her entire show from a script and will read the entire script, stage directions and all. More than once I’ve sat in an audience where the uninitiated saw her doing this and immediately expressed concern or even pity (“is she okay?” “should she be up there performing at her age?”) until they eventually realized that the joke was entirely on them.

The reality is that Bernice has a better memory than many people half her age and, centenarian or not, she’s always one of the sharpest and funniest people in the room. 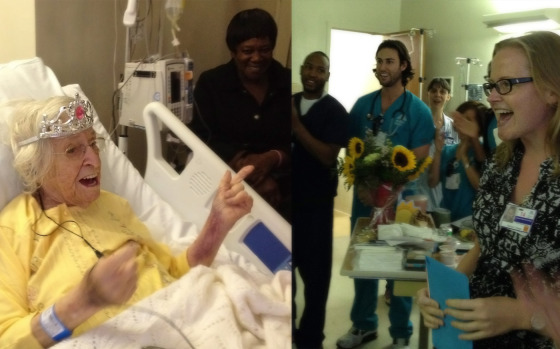 Bernice recently fell and broke her hip, but that didn’t stop her from entertaining on her 101st birthday yesterday. She performed an impromptu version of her famous “Anne Boleyn” routine (which I’m told she originally developed with Beakman himself, Paul Zaloom) for staff and visitors at Mount Sinai Hospital in New York City, where’s she’s recovering from surgery.

I know that Bernice loves to receive messages from friends, fans and other puppeteers all over the world. Although she doesn’t use the internet, messages left for her on the Bernice Silver Appreciation Society’s Facebook Page will be read to her while she’s recovering in hospital (and yes, that is her official fan club…they even sell Bernice merchandise). 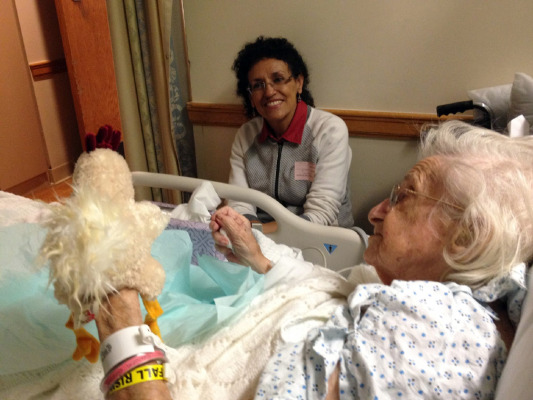 This is one of those “good news, bad news” type of posts, but the upshot is that Bernice had another surgery and is now on her way to a real recovery. The “bad” part is that the foot infection, which has been vexing her since the spring, has been dealt with via the removal of the part that has been causing her so much grief. The good news is that now she’s rid of the darn, rotten foot and can move on to truly be rehabbed, complete with modern replacement parts.

We are confident that Bernice’s rosy disposition and dedication to good health, combined with a lot of gumption, will have her up and around within the next couple of months. For now, she’s happy to have made it successfully through another surgery and to be free from her infected nemesis. I have attached a photo of her performing a chicken happening at Lenox Hill the day before the surgery.

A procedure like this is a terrible ordeal at any age, but if anyone has the positive mindset to see themselves through it, I think it’s Bernice. I’m so glad to hear that she now has a chance to make a real recovery from her recent health problems. After the sad passing of Nat Norbert Bucholz last week, Bernice is quite likely America’s oldest living puppeteer and a national treasure.

As mentioned in the original post, although Bernice does not use the Internet herself, messages and well wishes for her posted to her Facebook Group are read to her by family and friends and very much appreciated.

Here’s to a speedy and complete recovery Bernice, your fans hope to see you at the Puppeteers of America Festival in Connecticut next summer!