Hit enter to search or ESC to close
Feature FilmsPuppeteers

Kathputli – “the Colony of Wooden Puppets” – is an artist’s colony hidden away amidst the teaming slums and alleyways of India’s capital, New Delhi.

It was founded in the 1950s by a group of wandering Rajasthan puppeteers as a tent camp on what was then vacant land at the edge of a jungle. Over the years the colony has grown to become home to thousands street magicians, acrobats, puppeteers and other performers. Together they make up the world’s largest community of performing artists.

While Kathputli has grown and transformed itself over the years, so has the city surrounding it. Located in booming Western Dehli, the land Kathputli sits on has become incredibly valuable real estate. In 2010 it was sold by the Delhi Development Authority (a civic body that technically owns the land, although that is disputed by many residents) to a private developer as part of a public/private partnership scheme that will demolish the colony and replace it with luxury homes and a shopping mall.

Under the plan residents will be moved to temporary transit camps nearby. Kathputli’s performers have been promised new and supposedly better living conditions in a modern high rise that will be built within a few years, but many of them distrust the Dehli government and have been protesting against the plan since it was announced.

Although Kathputli is generally considered a slum, it is also one of the most unique communities on earth. Generations of performers have been raised within its hand-made walls. Suggestions to upgrade and redevelop it as a tourist attraction instead of razing it have been rejected by officials and residents fear that a forced move to temporary camps will destroy their way of life. 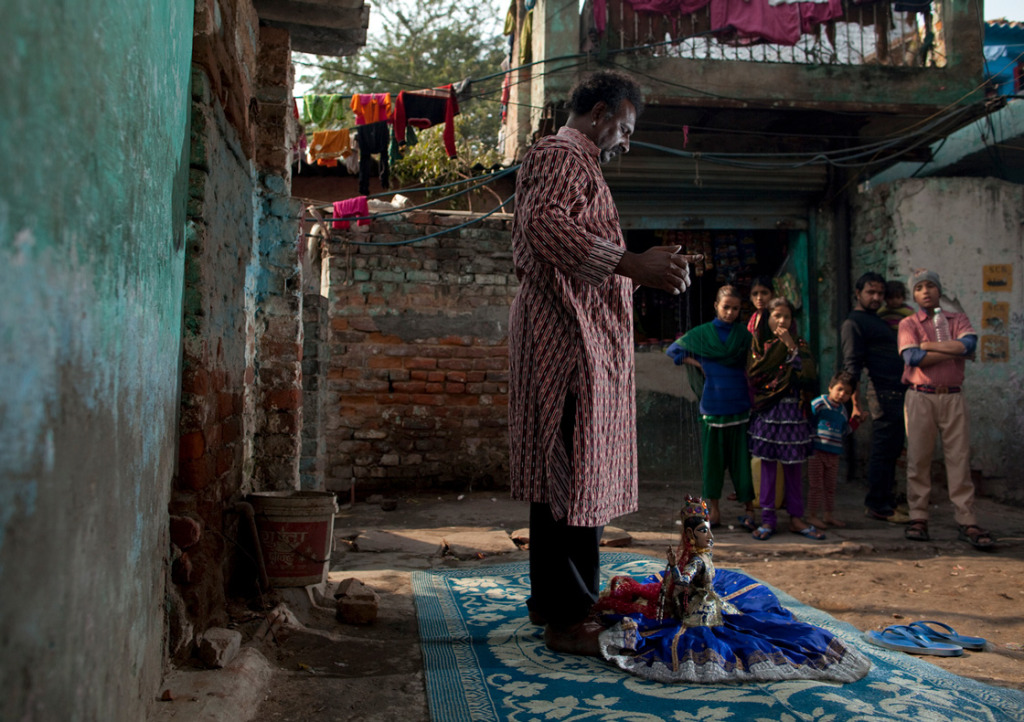 I first heard about the situation in Kathputli around the time that work on PuppetVision: The Movie was beginning and I’d really hoped to visit India to document some of what was happening there. I wasn’t able to arrange the necessary budget and logistics to do that, but thankfully other filmmakers did and now we can catch a glimpse of what life in the colony was like in the acclaimed documentary Tomorrow We Disappear.

Featured in the film is Puran Bhatt, widely considered one of India’s most talented puppeteers. His father, Manoram, was the first President of Kathputli and Puran was one of the leading activists fighting against the sale of Kathputli’s land to developers. The film follows him as he writes letters to government officials, leads giant puppet protests and tries to convince many of the colony’s poorest residents not to sign away their rights.

Although anyone familiar with India’s politics and the forces at work in this story could have predicted that the struggle to preserve Kathputli would ultimately be futile, the filmmakers explain why they decided to make the film anyway:

Kathputli is dying before our eyes, and our hope is that the world gets to experience it before it’s gone. In that way, we consider “Tomorrow We Disappear” as its funeral; not a Western-style funeral that laments the tragedy of loss, but an Indian funeral, which honors the uniqueness and vibrancy of its life. In the end, we ask, what happens as these artists step into the unknown: what do they dream? What do they fear? What will they take with them, and what will they leave behind?

The story of Kathputli isn’t over. Although some of the families began voluntarily moving out to nearby transit camps earlier this year, many others refused to leave. That led to Indian police raiding the Kathputli Colony in August and allegedly dragging artists from their homes, beating them and demanding to know why they hadn’t relocated to yet (the incident was recently taken to the Indian courts).

Whatever happens and no matter how the situation is ultimately resolved one thing seems certain – a way of life for the generations of performers who lived in Kathputli is quickly coming to an end.

Tomorrow We Disappear is currently playing on the international film festival circuit. To learn more about the film, the artists of Kathputli and how you can help support them, please visit www.twdfilm.com.

19/11/14 Update: A reader in India who feels that Tomorrow We Disappear and much of the Western media coverage of Kathputli has been too one sided sent in a link to the Kathputli Colony DDA web site, which is a PR site operated by the Delhi Development Authority.

Putting aside the site’s condescending description of Kathputli’s residents as a “simple people” and the fact that it does not really address many (any?) of the issues about Kathputli’s redevelopment raised in Tomorrow We Disappear and elsewhere, it does provide documentation of the efforts being made to improve the living standards of former Kathputli residents. There are, after all, always two sides (at least) to every story.

16/3/15 Update: In an unexpected new development, the DDA has bowed to public pressure and declared its ‘in-situ’ redevelopment model a failure. Going forward the DDA has announced it will give Kathputli residents direct involvement in all development decisions. Under this new proposed model, any commercial developer wanting to build in Kathputli will need to get the approval of 70% of the colony’s existing before anything can be built. This is a huge victory for Kathputli residents, due in part to the awareness raised by Tomorrow We Disappear and other documentaries about the colony’s plight. You can read more about these new developments in the Indian Express.