Phillip Huber and the China Girl 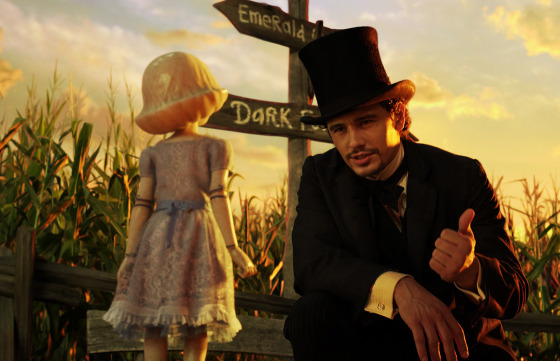 James Franco with the China Girl in “Oz The Great and Powerful” (image © Disney Enterprises, Inc.)

Ain’t It Cool News has been doing a series of interviews from the set of Oz The Great and Powerful an upcoming Disney film directed by Sam Raimi. One of the interviews features Master marionette puppeteer Phillip Huber, who performed an 18 inch tall marionette version of the film’s “China Girl” character on set:

One of the absolutely great discoveries of my two days on the set of director Sam Raimi’s OZ THE GREAT AND POWERFUL was the character of China Girl. She stands about 18-in. tall and, as her name implies, she’s made entirely of a very fragile china. When we see her in the film, she will be an entirely computer-generated character. However, when they were shooting her scenes (most of which are with James Franco), Raimi wanted her movement to be predicated by an elaborately constructed marionette operated by master puppeteer Phillip Huber…

…Watching Huber maneuver China Girl was an astonishing thing to see. She gets into a small argument with Franco, and walks away in a sassy way with a hand on her hip. We also saw her point at Franco accusingly.

Although the actual marionette probably won’t be seen in the movie – it was used as a stand-in and to create reference footage for the final CG version of the character – it’s a fascinating discussion about how old fashioned puppetry can still be used to compliment the latest state-of-the-art digital effects.

Oz The Great and Powerful will be released in North American theatres on March 8th.