Now that the new Disney-produced, J.J. Abrams-directed Star Wars Episode VII is officially in production, updates – both official and unofficial – from have been coming fast and furious.

It began with the video embedded above, with J.J. Abrams  announcing a new charitable initiative called Star Wars Force for Change that will offer fans the opportunity to win a part in the movie by making charitable donations (watch the video for more details).

Mid-way through the announcement, J.J. is interrupted by this full body puppet creature: 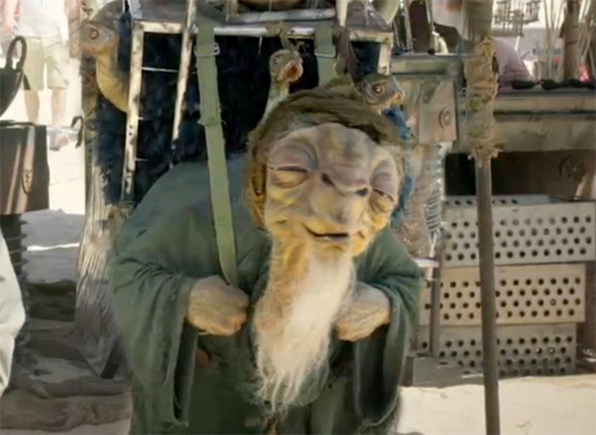 This creature appears with JJ Abrams in the first video from the set of Star Wars: Episode VII, currently in production.

The creative team behind Episode VII have been promising fans since last year that the new Star Wars films will return the franchise to its roots, not only in terms of characters, but also in terms of the use practical effects. I think it’s safe to assume that the producers put this creature in to J.J.’s announcement at least in part to reassure fans that they are making good on that promise.

That video was to be just our first glimpse of a new Star Wars creature. On Monday, TMZ published a gallery of allegedly “leaked” photos from the Star Wars set in Abu Dadi that included this tantalizing shot of a large scale practical creature: 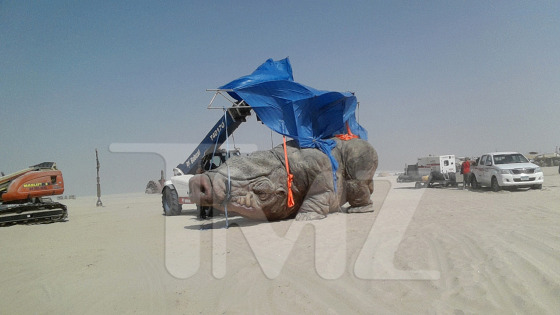 You can see the full gallery of pictures here; additional photos of the creature under construction were published in a gallery yesterday.

A certain segment of die-hard Star Wars fans have been griping about the use of computer graphics in the newer Star Wars films since the release of The Phantom Menace in 1999 (seriously, people have been complaining about this for fifteen years!). While the prequels certainly have some issues, believe it or not they actually had more practical effects like puppets, animatronics, miniatures and real locations than the original trilogy ever did (really!), a point that’s made in this deleted scene from the the documentary Sense of Scale:

Lot of CGI-filled blockbusters – from Jurassic Park to Lord of the Rings to even the Transformers movies – combine cutting edge digital technology with a lot more practical effects that most people realize, so in many ways these photos from the Star Wars set are kind of a non-story. This latest Star Wars movie is just continuing a tradition that began in 1977 with A New Hope.

I don’t know about anyone else, but I’m kind getting excited to see these new films! How about you?

In case you missed the joke, that hand written note signed by J.J. is sitting on top of the Millennium Falcon’s hologame table.

Update via The Verge.