A Mile in these Hooves

No one ever said that suit acting – or living – was easy.

A Mile in These Hooves is described as “is a story about love, friendship, and a burlap donkey.” It’s a new Canadian mockumentary directed by James Brylowski about two brothers who set out to break the world record for longest distance travelled in a two-person costume.

The fifteen minute short was shot in twenty days during a road trip across North America, with James and his small crew following the film’s fictional 3400km journey from Toronto to Los Angeles.  A long the way they filmed in iconic locations like Canyonlands National Park, Monument Valley, Venice Beach and a lot of places in between using a donkey suit built by Jamie Shannon. 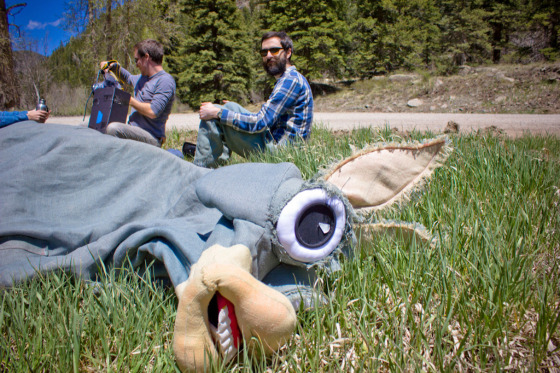 The donkey suit on location in Durango Colorado (source: A Mile In These Hooves).

Even though – unlike the characters in the film – the suit performers weren’t actually in the donkey suit for the entire three week journey, it was a difficult shoot, as he explained to Metro News:

It’s so hard and I can attest to that because I’ve been in it for long periods of time. It sucks. We shot a lot of it with my wife in the back and Eggnog (creative consultant Geoff Agnew) in the front and there’s probably been about 20 people who were in the donkey over the course of the film. The way we would do it would literally do like 20 second takes because a lot of it was shot in the southwest in the states. So we would be at Monument Valley, Utah or Joshua Tree in California and it would be 109 degrees. To go inside that donkey costume was ridiculous.

A Mile in these Hooves is currently on the film festival circuit in North America and will be distributed online in 2015. You can learn more at aMileinTheseHooves.com.