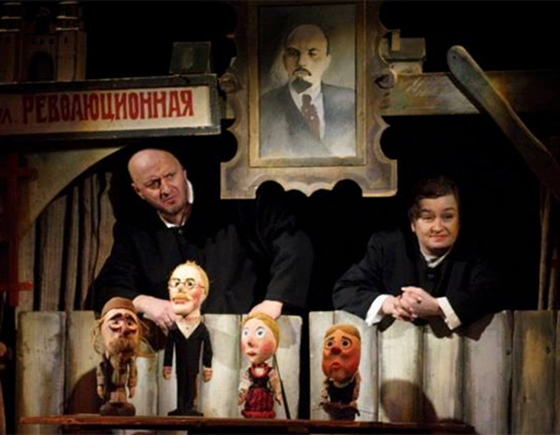 Peace Puppets is a new initiative to send puppets to children in southern Israel and Gaza who have been traumatized by war.

From the yes-this-is-actually-happening department: Vladimir Putin is apparently designing characters for Good Night, Little Ones! a popular puppet show on Russian television.

Spare Parts Puppet Theatre is brining Moominpappa at Sea to the Awesome Arts Festival next month.

Gavin MacLeod brings Avery the Owl onstage for one night only in Honey Pot September 26th in Melbourne.

The giant puppets of Royal de Luxe were on the streets of Limerick, Ireland this weekend.

Scott Land is back in Scotland.

Handspring Puppet Company’s Ubu and the Truth Commission was the final production in this year’s Edinburgh International Theatre Festival.

Canadian Puppet Slam alert! The 2014 Winnipeg Puppet Slam is September 12th (link goes to a Facebook page, login or registration may be required).

Jessica Gabriel and Chloe Z talk about Canada’s Mind of a Snail Puppetry.

It’s almost time for the Puppets for Peace Festival in Victoria, British Columbia.

Peer in to the playful guise of Bread and Puppet.

Kirk Thatcher talks about his career in the latest instalment of the Getting Felt Up podcast.

The Drawbridge Puppet Theater is celebrated its ninth anniversary this week.

The Cashore Marionettes are back on tour this Fall.

The board of the famed, but financially strained Heart of the Beast Theatre has penned an open letter to the Minneapolis community.

Puppeteer Ricki Vincent explores the mind of Hunter S. Thompson in The Dr. Is Out.

The Thurrock Teaching Schools Alliance Cultural Programme is looking for a puppetry artist in Thurrock/Essex, England with substantial experience working in the education sector for a project in October/November.  Email Jo at josmith909@googlemail.com for more details.

Subscribe to the PuppetVision newsletter to receive puppetry news, resources and more from around the world in your inbox every week!